It’s a sign of the times that the UK’s Advertising Standards Authority (ASA) have acted against a Nike advertising campaign that used the Twitter accounts of two premiership football (soccer) players to send out links to Nike content. The issue that the ASA have is that it was not clear to users that the tweets were adverts and have suggested using the hastag #ad in the future to ensure that the were ‘obviously identifiable’ as adverts.

Whilst that simple solution may appease the advertising powers that be, I think Twitter are soon to solve the issue for marketers whilst monetising the practice of celebrities/power users/social media-ites “selling” their accounts to be used to send adverts or endorsements  Services like adly and sponsoredtweets have been around for some time and offers users with large follower counts the ability to make money in exchange for allowing advertisers to send endorsements on their behalf at any time.

Promoted tweets currently display the same account name as the account that posted the tweet and it seems a bit of a waste to display the same account name twice on a tweet, which makes me think that this has to be the next logical step for Twitter to monetise their platform. If it’s not they’re missing a trick as it not only acts as a revenue stream for them but also encourage users to use their platform.

Twitter could offer the service along side the regular promoted tweets to allow brand marketers the opportunity to use power accounts and be the first(?) social network that allows power users and celebrities (verified only?)  the ability to monetise their online presence (whilst simultaneously selling their soul to the social media devil).  Any tweets that have been posted as an endorsement (or an en-dorsey-ment if you will) would have a badge appended to it in the same way as promoted tweets but have copy that implies it is an endorsement on behalf of the brand. 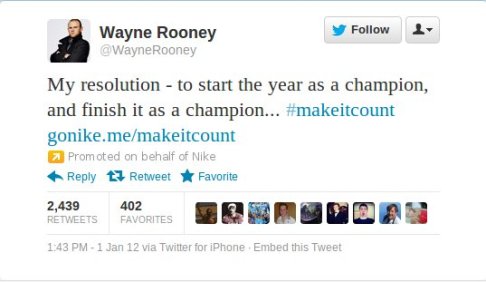 @jack, @biz, @dickc – you can have the idea for free – but I want recognition for the use of ‘Endorseyments’.