I signed up to a Windows Azure account earlier this week as i’m working on a project that I need hosting for, details of which will follow in due course. I had a look at a few hosting providers including (EC2 and Rackspace) and seeing as Azure is free throughout January and at 50% discount for 6 months, I thought I would give it a go.

I see this as ideal for a web developer who’s got no idea about server administration. I’ll persevere with it for now or at least until the end of the free period (end of January) but my patience is already starting to wain and the idea of EC2 is certainly quite appealing, despite the price differential.

If, like me, you hate experts-exchange.com results appearing in your google search results, you can use this bookmarklet to remove them.

Early to bed and early to rise…

Matt from work pointed me at an iPhone app last week called SleepCycle. It monitors your sleep patterns and can ‘apparently’ improve your morning state by waking you up at the most opportune moment, i.e. when you are in the lightest stage of sleep.

The iPhone needs to be placed on the bed while you sleep and uses the accelerometer to monitor your restlessness or lack thereof to work out how deeply you are sleeping. The first couple of days are used for calibration so it can ‘learn’ what kind of sleeper you are.

After the first night using the app I was quite surprised by the resulting sleep graph. I do distinctly remember being awake a couple of times during the night which you can clearly see on the graph around 4am and 6am. I was also surprised to see that i had gone to sleep so quickly as I feel like I normally spend ages trying to get to sleep. 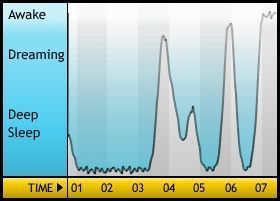 I’m interested to see how it goes over the next few days and whether it makes me a ‘better’ person in the mornings!